TL,DR: OpenGrants members are now eligible to receive 50% off Rote subscriptions through our perks program.

OpenGrants is thrilled to partner with Rote to make grant writing easier for our community of grant seekers & professional writers.

We partner with a variety of related companies, communities and service providers. Our goal is to partner with and recommend trusted resources that will be helpful for you on your journey to receiving—or helping others receive—grant funding. Check out our Perks Page, and create an OpenGrants account to gain access.

Rote is a tidy little system for storing and cataloging all of your final proposal language, so you can find the snippets you need to draft new proposals in just a few minutes. No more digging through hundreds of files to find that perfect paragraph. With Rote, all your language is right where you need it, every time.

Applying for grant funding means you’re writing the same stuff over and over in different formats. It should be easy to just take the language you’ve written in the past and re-use it… But with multiple drafts for each project, and last-minute cuts to meet character limits, it’s easy for that perfectly-worded paragraph you know is sitting somewhere on your computer to be lost forever.

The heart of Rote is the Language Library, where you can view any language you’ve written for past proposals, filter it to find the exact bits you need, and add them to your draft with a single click. 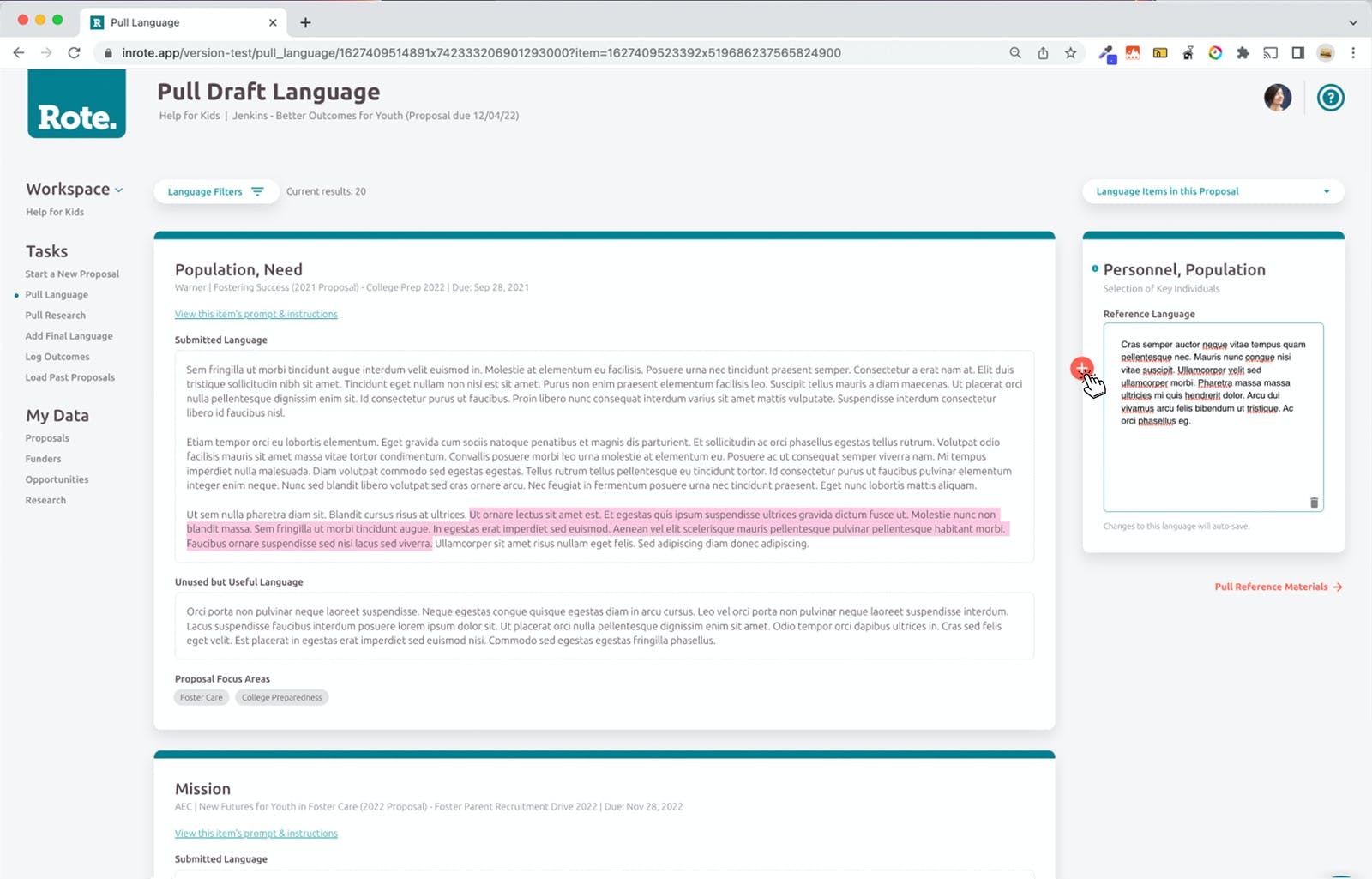 After collecting all the language you need for each prompt in your proposal, you can export your draft to Word or Google Docs and edit as you normally would. Once you’ve submitted your proposal to the funder, simply load the finalized language into your Rote library so you have it for your next project.

Is Rote for you?

Rote is built for anyone writing funding proposals – nonprofits, startups, independent grant writers, agencies, researchers – but it’s definitely most valuable for those writing at least two proposals for the same organization each month.

Who is behind Rote?

Rote was dreamed up by a young woman named Kelly Claus while she was serving as Operations Director for a small nonprofit in New York City. New to the world of grant writing, and totally clueless about the organization’s institutional fundraising history, she wasted hours digging through the hundreds of files on her organization’s servers to find the language she needed. Fifteen years (and a couple of careers) later, she’s now a software developer, and has finally been able to realize the system she wishes she had way back when.

How to get it.

OpenGrants members are eligible to receive 50% off Rote subscriptions. Check out our Perks Page for more information, and create an OpenGrants account to gain access.